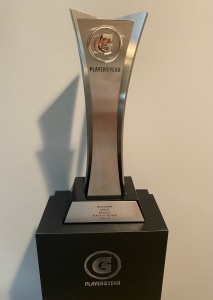 The 6-foot-4, 210-pound senior right-handed pitcher led the Timberwolves to a 22-3 record, the Class 5A state championship and the No. 43 national ranking by Perfect Game USA this past season. The 2021 Class 5A Pitcher of the Year, Kudrna compiled a 9-1 record on the mound with a 0.99 ERA and 100 strikeouts against just 11 walks in 57.1 innings. He also fired three shutouts, posted a WHIP of 0.67 and limited opponents to a .130 batting average. He did not allow an earned run in 12 postseason innings-pitched, striking out 18 in that span.

A member of his BVSW’s WolfPack Crew, which plans and executes school assemblies, Kudrna has volunteered locally at a food pantry. He has also served as a supervisor for area baseball fields, where he’s been a role model and mentor to youth players. “Kudrna is a stud ballplayer with big-time stuff,” said Michael Dudley, head coach at Blue Valley North. “He has the best arm we’ve seen in a while. He’s got ‘pitchability,’ meaning he’s not just a thrower. He seemed to elevate his team’s play whenever he was on the mound. There aren’t many better prep arms out there in the country. I would say he’s very worthy of the award.”

Kudrna has maintained a 3.50 weighted GPA in the classroom. He has signed a National Letter of Intent to play baseball on scholarship at Louisiana State University this fall, but is projected as an early round selection in July’s Major League Baseball draft.

Through Gatorade’s cause marketing platform “Play it Forward,” Kudrna has the opportunity to award a $1,000 grant to a local or national youth sports organization of their choosing. Kudrna is also eligible to submit a 30-second video explaining why the organization they chose is deserving of one of twelve $10,000 spotlight grants, which will be announced throughout the year. To date, Gatorade Player of the Year winners’ grants have totaled more than $2.7 million across 1,117 organizations.

Since the program’s inception in 1985, Gatorade Player of the Year award recipients have won hundreds of professional and college championships, and many have also turned into pillars in their communities, becoming coaches, business owners and educators.

To learn more about the Gatorade Player of the Year program, check out past winners or to nominate student-athletes, visit playeroftheyear.gatorade.com, on Facebook at facebook.com/GatoradePOY or follow us on Twitter at twitter.com/Gatorade.

LINK TO GATORADE PLAYER OF THE YEAR